Carnac (in Breton Karnag) is a small city on the Gulf of Morbihan on the south coast of Brittany in the Morbihan Department in northwestern France. It is located halfway between the medieval city of Vannes and the seaside resort of Quiberon. It is famous mainly due to the huge concentration of megalithic monuments in its surroundings. But since the end of World War II, it has become a popular tourist destination, although Carnac beaches (and mostly beaches in Brittany in general) cannot offer as pleasant a water temperature as the Cote d’Azur on the French Riviera. The somewhat lower temperature makes up for the Atlantic Ocean with its clear water, wind and waves that desire yachting and windsurfing, and the abundance of fish that attract fishing sports. During the summer months, the number of inhabitants increases several times thanks to tourists.

And in recent years, when summer temperatures reach uncomfortably high levels, Carnac beaches (and indeed the whole of Brittany) have become a haven for an increasing number of French tourists. While the August temperatures around Paris rose above 40°C, in Brittany it was pleasant twenty-five degrees.

Carnac has five main beaches. Beaches from west to east: the small beaches of Plage de Saint-Colomban, Plage de Ty-Bihan and Plage de Legénèse, a long beach extending along the coastline of the city La Grande Plage, followed by Plage de Beaumer and (our favorite) Plage Le Men Du (GPS: 47.5780075N, 3.1042775W), which lies in close proximity to the village of La Trinité-sur-Mer, which with its large port until 1864 was part of Carnac.

On Thursday evening in Carnac, local markets, products and various works of art by local artists are held. There is no shortage of street musicians.
They take place in the city center near the church of Église Saint-Cornély de Carnac. The streets in the area are closed for car transit.

– Church of Saint-Cornély from the 17th and 18th centuries. According to legend, St. Cornelius turned here the soldiers of the Roman legions who persecuted him after his expulsion from Rome into stones – menhirs. These are also referred to as the army of Cornelius.

– Dolmen Mané-Kerioned with its engraved stones

Tumulus St. Michel is a megalithic grave mound located east of Carnac in Brittany, France. It is the largest grave cairn in continental Europe. The mound was built during the fifth millennium BC.

Saint-Michel tumulus consists of a pile of soil and stones 125 meters long, 50 meters wide and 10 meters high. In 1862, researchers discovered a central chamber containing objects such as axes, pearls, flint instruments and sillimanite (a mineral used to make jewelry). The objects are on display at the Musée de préhistoire in Carnac.

Since 1889 it has been protected as a “Monument historique” (National Cultural Monument).
Tumulus was after examining restored to original condition and the its  interior is inaccessible.
At the top of the tumul stands the Chapelle of Saint-Michel. 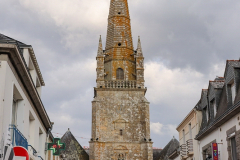 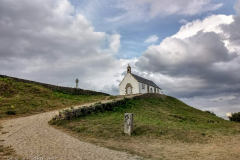 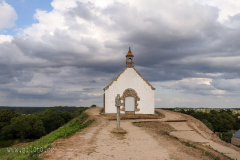 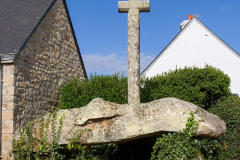 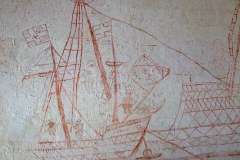 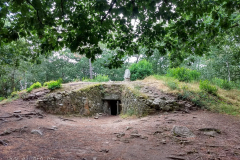 Menhirs and dolmens of Brittany – Carnac and surroundings PHOTOGALLERY: https://www.siloto.cz/photogallery/index.php?/category/brittany Menhir (from Breton “men” = stone and “hir” = long) is […] Enclos paroissial – Parish close – is an architectural complex typical of the central and western part of Brittany. Most Parish Close are in the Finistère department in the Elorn valley between Landivisiau and Landerneau (west of Morlaix).